In the world of fitness supplements, there are many you can choose from. Some of them aim to improve your performance, some of them are meant for faster recovery, and some are even meant for both of these things. That being said, not all supplements are reliable…

Some supplements have even been referred to as useless over the years. However, there is one supplement that has never been so badly talked about. In fact, this supplement is said to be the most credible and reliable supplement on the market today. Do not worry, I will not beat around the bush with this one as the supplement I am, in fact, talking about is creatine. But what is creatine? What does it do? Do creatine and calisthenics go hand in hand? Keep reading to find out!

Creatine is an amino acid that we all have. It is produced in the kidneys and then primarily stored in the skeletal muscle but also in some parts of the brain. This amino acids role in the body is to provide sudden bursts of explosive energy. This explosive energy is the result of creatines bi-product – ATP.

ATP – (adenosine triphosphate) is an energy source that derives from creatine. It is utilised by the muscles during quick and intense muscular contractions. Without it, we would surely struggle to perform very daring lifts and stunts. Generally speaking, the body makes roughly 1-2 grams of creatine per day. This, in turn, would mean that supplementation is pretty much useless, right? Let’s find out!

Why you should take creatine when doing calisthenics?

As mentioned above, the body makes roughly 1-2 grams of creatine per day. This being the case, some might question the point of taking additional amounts of creatine. While this is definitely a valid concern, it becomes null and void when you take note of the benefits that can occur from additional amounts.

Before I get into the details, let’s take a look at some benefits you can expect from taking creatine. 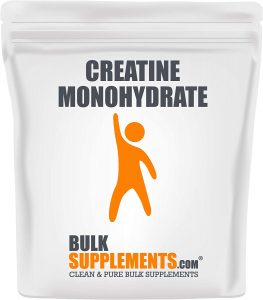 The 3 main benefits of taking creatine when doing calisthenics

As you can now see, creatine has some very encouraging benefits and since this is the most researched supplement, you can absolutely be assured of its benefits.

However, like any supplement, there are potential downsides you could potentially run into. Let’s take a close look…

The potential downside to taking creatine

It is certainly worth noting that this side effect usually only occurs during the loading phase. The loading phase, for those of you who don’t know, is a phase during the start of a creatine cycle. It usually involves taking around 3 times the normal dose. This is done to try and saturate the muscles at a faster rate.

As you might’ve guessed, this side effect can easily be avoided by not overdoing it in the beginning stages.

So, if you arrived here with no knowledge of creatine and its potential benefits, you can rest assured that you now know exactly what to expect with creatine. In terms of fitness, creatine will almost always help you to achieve your goals, as you probably now know. In addition, if you do decide to start taking this supplement, you will now be more aware of the potential stomach issues you can get during the loading phase.

That being said, it is certainly worth noting that the loading phase is not necessary. Consistent consumption of this supplement will eventually lead to full saturation. All in all, creatine is a fantastic supplement and taking creatine when doing calisthenics will reap nothing but benefits.

Oops! We could not locate your form.