Every movement starts from the trunk: your core. You core is the base for any movement in the rest of your body. For example, when you start moving your arm up, you need enough tension in your core to create a stabilized base for your shoulder to move. Daily movements and training exert a lot of forces within your body every day. To absorb these forces, you need core stability: a stabilized trunk. It is a very important system in the body. So, let’s find out more about core stability.

What is Core Stability?

The core has several functions. Very importantly, it protects the spine and nerve roots. But of course, it is also used to carry loads. It creates a stabilized base for the upper and lower limbs to move. And it helps use energy as efficiently as possible. But the core muscles are not the only stabilizing system. To explain the stability system of the core and the rest of the body we use the theory from White & Panjabi.

Stability is not just a matter of your core but also of other body parts. To explain the term stability we use the Panjabi theory. Panjabi describes stability in 3 subsystems:

If one of these threee subsystems does not function well it can lead to acute or chronic problems. A problem in the passive system may be caused by mechanical injury such as overstretching of the ligaments. The injury may result from overloading of a normal structure or normal loading of a weakened structure. This will lead to a decrease of the load-bearing and stabilizing capacity of the passive subsystem. And it may require compensatory changes in the active subsystem.

An injury does not always lead to trauma. In fact, overloading is a bigger problem! But why does this give you pain? Let’s look at the three subsystems again. The passive system cannot be trained much. The transducers relay information to the brain but you cannot really influence it much. If it does not work well, you need to compensate for it with other sub systems, like the active system.

The active system consists of moveable body parts, like muscles. You can train this sub system and make it strong enough to compensate a passive sub system. But this takes time. The muscles need to adapt to the new load. So, how can we get faster results? By training the neuromuscular system.

You can train this system by performing controlled and correct movements with the trunk. It is not always about heavy weights and fast movements. Controlling a movement you make with your trunk is harder than you may think.

While performing a heavy deadlift you take a deep breath and lock your core by holding your breath. You will use your global stabilisers to do that. But those muscles cannot do that all day long. The local stabilisers go from one vertebra to another. They are very small and do not generate a lot of power. And it is very hard to use them correctly. Additionally, you need them all day long to correct your body position and to adapt to external forces. They consist of a type of muscle fiber that can be active on low intensity for a very long time. This is a very effective system protecting your back from injury, but it is hard to use.

That is why we recommend to start training carefully. Make sure to perform each exercise correctly. Do not start doing as many reps as possible but start with perfect form. While using perfect form, you can focus on stabilizing all your body parts. Once you learn the perfect form you can start increasing reps and weight. But remember, perfect form comes first!

Core stability is a very popular term in training, but a lot of people do not know how it works or how to train it. There are three sub systems involved in stability: the passive, active and neuromuscular system. To get the most out of your core stability system, you need to make the active system (the muscles) strong enough to handle external forces. In addition, the neuromuscular system needs to be on point to control every single muscle movement, especially by the local stabilisers. Careful practice will help increase your control and core stability. Click here to see how calisthenics will help you.

Literature used in this blog article 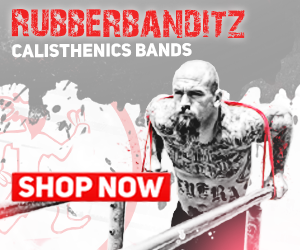