Why it is so Beneficial to Train in a Calisthenics Park

When spring or summer is just around the corner, many Calisthenics practitioners hit the parks for a full work out while soaking up those healthy sunbeams. With good weather come good vibes and that can only be experienced in its fullest at a park. The growing Calisthenics community is always eager to learn new things and most are welcoming to newcomers wishing to do the same. People are almost always willing to help each other by giving advice or borrowing each other their Calisthenics equipment. No resistance band or forgot your chalk? If you ask nicely, you can often borrow it without hesitation. Striking up a conversation is easy too and you may make many new friends on the basis of your mutual interest in Calisthenics.

Find a Calisthenics Park Near Me

The big benefit of working out in a park is that it has all the equipment you need. A common Calisthenics Park will always have pull-up bars and dip bars, and it is all free to use! So where do you find these parks? We’ll give you three easy and quick methods and alternatives.

#1 Use the Internet to Find Calisthenics Parks

The quickest and easiest way to find a Calisthenics Park near you is to use the world wide web. There is an application called Calisthenics Parks which we frequently use to find a park near to us when we’re on the move. This application has an index of almost every park in the Western world. If you’re on a mobile device, it already knows your location most of the time. If not, you can easily look up your own region and it will show you the Calisthenics Parks closest to you.

A great feature of this app is that it also shows you what kind of park it is. It mentions all the available equipment the park has too. There’s even a user rating which you can contribute too as well. In other words, this free application is a great source to find nearby Calisthenics Parks and we couldn’t survive without it (for instance when we’re on a holiday). 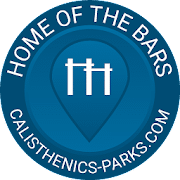 Another way to find park by using the internet is by asking our Google God. Simply type Calisthenics Park Near Me in the search bar while you have location on. This should give you similar results to the Calisthenics Parks app but sometimes also some new ones which weren’t indexed by the app yet.

Finally, Calisthenics is a big thing on social media. Especially localized groups, like on Facebook, can help you find the best Calisthenics Parks near to you. Just join these groups and ask nicely. Often you can even meet up at a park like this.

#2 Use playgrounds as your workout spot

What do you do, when the closest Calisthenics Park is a 20-minute drive? Well, you take your bike and peddle it up there, of course. It’s a good warm-up for your workout. But if the nearest park is too far away, the best alternative is to search for local playgrounds. Calisthenics Parks are essentially playgrounds for grownups and what children do playing, adults do while exercising.

A lot of playgrounds have bars just like those in the parks, which can be used for the same exercises. Monkey bars are another resource commonly found at playgrounds which can be repurposed for your Calisthenics needs. You can find playgrounds using the internet in much the same way as you found Calisthenics Parks. Be considerate towards the children, it is foremost meant for them to play on. Wait until they’re at home, for instance in the evenings, before you take up their spot to do your exercises. School playgrounds tend to be empty even during the day when school is out for spring or summer break.

Calisthenics can be performed pretty much anywhere, although we don’t recommend everywhere to avoid questions and awkwardness. You’ll find many practical resources outside for you to do Calisthenics. Handball or soccer goals (that’s Yank for football) can be used to do pull-ups. Gymnastic Rings can be hung from a thick tree branch. Pedestals or benches can be used for dips. Walk or grab your bike for a ride and have a look around your area. Use your imagination and you’ll see suitable Calisthenics spots soon enough. As a plus, you’re also getting some cardio in.

I Cannot Find a Calisthenics Park Near Me

Maybe you live in the middle of nowhere, or city planning hasn’t caught up with the 21st century yet. Whatever your situation, you can’t find a Calisthenics Park near to you. Our advice to you then is to make your own park! It’ll cost less than you might think, and the advantage to it is that it’s yours. With a decent core of Calisthenics Home Equipment, you’ll be set for many years to come and it doesn’t have to cost an arm and a leg. For 200 bucks, you can have a fully operational home gym with quality equipment already (get ready to cancel your gym subscription).

Alternatively, you could make your own DIY Calisthenics Equipment. If you’re handy with a welding machine, your local hardware store should have everything you need. A basic pull-up bar isn’t that hard to fashion out of steel tubing. Big benefit: it’s cheap. The downsides are quality control, which is entirely in your hands and we can’t comment on your craftsmanship. The professional pull-up bars are well — professional.

If you don’t want to spend all day cutting up tubes and welding them together, knowing you’ve got two left hands, we recommend the Pullup & Dip Mobile Bar. This is a pull-up bar designed to be taken outdoors and packed up when you’re not using it. Take it with you anywhere and the only thing you need is a solid mounting point like a sturdy tree or concrete pillar. You can also turn the Pullup & Dip Mobile Bar upside down and you’ll have a functional dip bar as well.

Conclusions about Calisthenics Parks near Me

Finding a nearby Calisthenics Park was at one point challenging. But with more and more popping up, they’ve become a more common sight in and around residential areas. There are a few ways to find Calisthenics Parks near to you, such as googling them or joining a local Calisthenics Facebook group. The easiest and quickest way is by using the Calisthenics Park app. If the closest park is still too far, you should search for other workout spots like playgrounds.

If all else fails, being a little more creative can still get you a long way. You could use alternative objects to do pull-ups and dips or make your own Calisthenics Equipment. Finally, you can always grab your purse as well and buy suitable outdoor Calisthenics gear.

Here are some frequently asked questions we received about finding Calisthenic Parks.


Is there a Calisthenics Park near me?

With over 1200 parks in the US and nearly 600 in the UK, there is a good chance you can find a Calisthenics Park near to you. However, parks tend to cluster in and around residential areas. They are also a relatively new thing, so will be placed during new urban development more so than where urban development is at a standstill.


What is there to do at Calisthenics Park?

It depends on the size of the park. Most Calisthenics Parks will be equipped with at least the basics, like a Pull-Up Rack and a Dip Stand. Larger parks may include different variations of bars of various heights and configurations. The largest parks even have a running track.


How do you work out in a playground?

Most playgrounds will have bars of various heights you can use to do pull-ups and dips. Keep in mind that playgrounds are meant for children, not Calisthenics and the fit of these bars will unlikely be perfect for an adult. You can also use a monkey bar do pull-ups and chin-ups. Just make sure you visit a playground in the off hours, when there are no children around who wish to play. Be considerate.

You can also use a brand new application workout-places.com to find workout parks near you.

Hello! Thanks for the great additional information. I checked https://workout-places.com and it looks great. Thanks!